On Katimavik, I learned the most from the guy I liked the least. 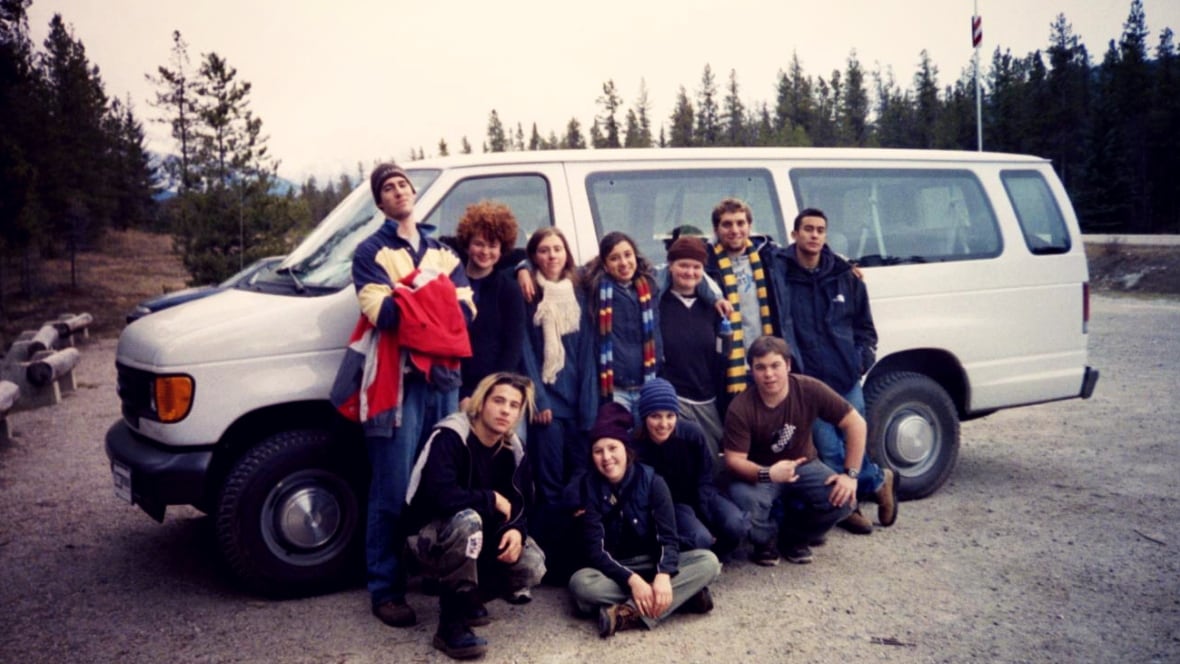 In 2004, Fabiola Carletti was one of 11 young Canadians randomly selected to live and work together for a period of nine months. (Sebastien Ouellette)

It was 2004 and George W. Bush was running for a second term as U.S. president. Mike, my least favourite of several new housemates, had just learned that I was not a fan.

Our first attempt at a political discussion, if you could call it a discussion, had just gone up in flames. I was slumped on the couch, fighting back tears. Mike was pumping his fist, laughing and chanting.

I could barely believe I’d be stuck with this jerk for the next nine months. It would certainly feel like four more years.

Mike and I had both been selected to participate in Katimavik, Canada’s largest national youth volunteer program at the time.

We were among hundreds of young Canadians randomly sorted into groups of 11, then sent to live and work in three communities for three months each. The youngest among us was 17; the oldest 21.

In those days, each “Katimagroup” reflected the regional diversity of Canada, including both English- and French-speaking youth from big cities and small towns.

The project was meant to break us all out of our respective Canadian bubbles and make us more engaged, caring and capable citizens.

I assumed only lovey-dovey lefty types would be interested in Katimavik, not self-described alpha males like Mike. (Turns out his mother had filled out his forms and told him he was going on a “camping trip.”)

He certainly stood out in our little house of stereotypes.

There was a funky vegan from Victoria, a friendly Manitoban from St. Boniface, a smiley hippy from Peterborough, Ont., a handy tomboy from Woodstock, Ont., a punk anarchist from Montreal, a pretty boy from Quebec City, a clean-cut jock from Ottawa, a quirky introvert from L’Assumption, Q.C., an earnest island boy from Lunenburg, N.S. — and Mike. I dismissively filed him under gym nut from Langley, B.C.

Trying not to play the part of snobby Torontonian, I pretended I’d heard of the smaller towns (I hadn’t), was totally fine with one shared computer and no television (I wasn’t), and could speak enough French to fully understand the francophones (I couldn’t).

I was eager to bond with everyone else in the house and quietly hoped Mike would do something dumb and get sent home. I felt I could really enjoy our first town — Leduc, Alta. — so long as I stayed far away from Mike. 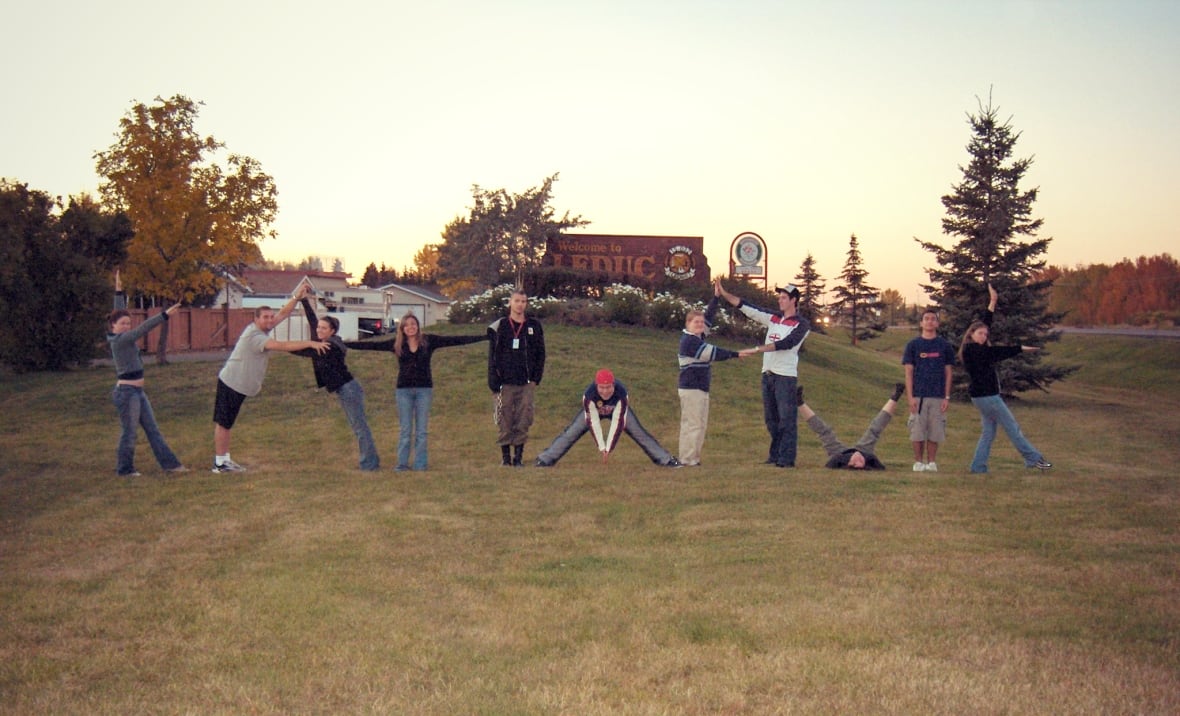 Our group attempts to spell Katimavik. I’m the “T” and Mike is the second “I”. (Sebastien Ouellette)

A real piece of work

When our project leader read the names assigned to volunteer at the local recreation centre, my heart sank. I was one of three on the list. And so was Mike.

I decided to keep my distance. He was interested in outdoor work, so I asked for indoor projects. I tuned out his conservative opinions. I tried to ignore that he’d written “four more years” on a shared white board.

I assumed only lovey-dovey lefty types would be interested in Katimavik , not self-described alpha males like Mike.– Fabiola Carletti

Instead I focused on practicing my French, a language he didn’t speak, with Julie (the endearing eccentric from L’Assomption). We tolerated each other, and that was enough for me.

With our second placement in St. Jovite, Q.C., came renewed hope to get away from Mike — but when our new project leader told us who’d be working at the organic farm, the three names were Fabiola, Alicia and Mike.

I should have known he’d want to work outdoors, but I assumed he wouldn’t be into the rest of it. The farm was home to several adults living with mental disabilities.

Thing is, the farm was a special place. The loving and lively residents immediately won Mike over. As the weeks passed, a tender, even joyful side of him started to emerge. He cheered me on as I shed my city girl habits. 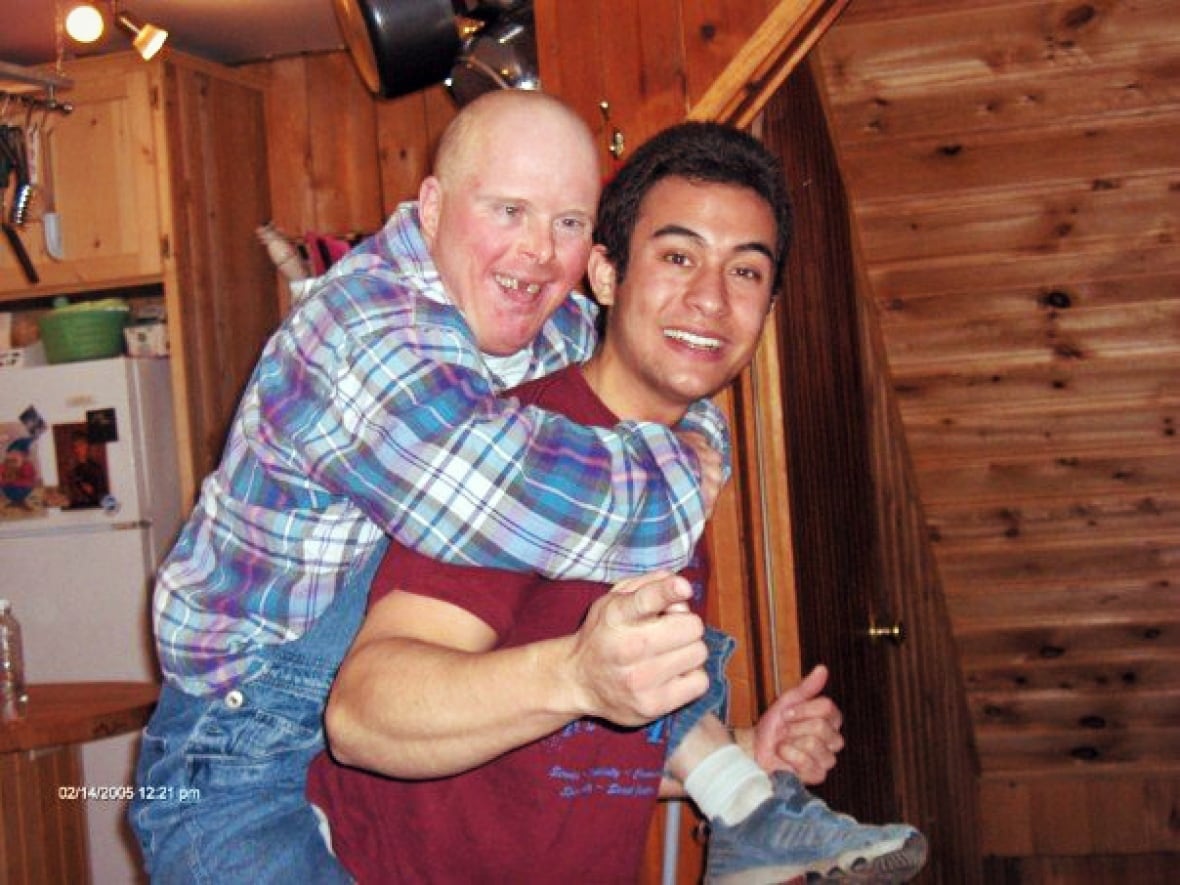 This time, I actually saw him working. He brushed the cows with care. He chopped wood with precision. He was kind and patient with the residents and regularly burst out laughing.

Over time, the three of us became Farm Team, finding common ground as we shelled beans, chopped wood and brought the cows home, literally, the day they escaped. I was shocked to discover we shared common needs beneath our talking points. We wanted to be good at something, belong somewhere, safely screw up sometimes.

“You’re not so bad,” I whispered to Mike one day.

A true test of friendship

By the time we got to our third and final home in Bathurst, N.B., Mike, like everyone in the house, had gone from a regional stereotype to a full-fledged, complicated person. It’s easy to hate categories of people; it’s a lot harder to hate real people up close.

When work assignments were handed out again, I was happy to see we’d still be working together, this time one on one, creating healthy lifestyle programming at the local high school.

By now we were now a well-oiled machine. We ran popular lunchtime events and even managed to fundraise, repaint and reopen an abandoned exercise room — a big deal for growing teenagers at the school.

“Forming, storming, norming, performing!” I said while painting, quoting one of our cheesy learning plans. We burst out laughing.

But then one night, when the project leader was out of town, a secret boozy birthday party got out of hand. I passed out early, but woke up to news that Mike had all but shattered his relationships with multiple people in the group, including our farm team friend Alicia.
“I hate him,” she told me in the morning. Others whispered about sending him home.

Here we were in a situation I had longed for at the start of the program, but now, nearing the end, the idea of splintering made my heart ache.

The family you choose

Katimavik is the Inuktitut word for meeting place. It seemed like such a sunny and abstract term until the day the group gathered in the living room, waiting to see if I could convince Mike to come downstairs while the project leader was out.

“I already apologized to the people involved,” he said, eyes lowered.

“We’re all involved, Mike,” I said. There was a long pause, and Mike got up. We walked downstairs together.

What happened next was nothing short of amazing. A circle of 17 to 21-year-olds took turns speaking honestly, vulnerably and respectfully, despite the raw feelings. It would take a couple weeks for things to normalize again, but they did.

Our friendship made me realize the power of getting to know people who you think you could never understand.– Fabiola Carletti

There was no tension on the final day as we packed our bags to go back to our corners of Canada. But by then, every bubble had burst. We were real to each other.

It’s been more than a decade since we tearfully went our separate ways, but we haven’t lost touch.

Mike’s been to Toronto, I’ve been to Langley, we’ve met each other’s families and kept up with each other’s lives. To this day I call him brother.

Our friendship made me realize the power of getting to know people who you think you could never understand.

He made me appreciate what we lose, as individuals and as a country, when we only invest in people we easily like and totally agree with.

At such a young age, I think we figured out something many Parliamentarians don’t seem to get: so what if you win today? You still have to share tomorrow. Like it or not, we share this house called Canada; unless we want to stay in our own rooms, we’ve got to do better than tolerate each other.

The success of our home depends on it.